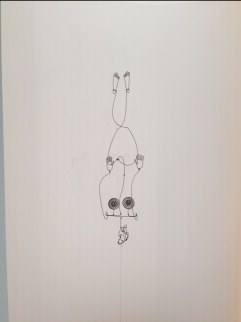 BrotherHerisme and I saw our pool buddy in the hotel dining room one evening and pointed him out to ParentsHerisme.  Both ParentsHerisme approached the man and introduced themselves.  He invited us to join him for dinner, and we did.  I recall FatherHerisme getting upset when the man not only encouraged us children to order dessert (absolutely unheard of in my family), he paid for our meals.  As our pool pattern continued, MotherHerisme showed up at the pool one time with a very reluctant SisterHerisme, to watch our play.  The man engaged MotherHerisme in happy conversation, and MotherHerisme became comfortable with him.  The man asked if BrotherHerisme and I could come to his room to pick up a gift he wanted to give to ParentsHerisme from his country.  MotherHerisme agreed.  This incident is when I recall becoming uncomfortable with the man.

The two of us went to the man’s room and I remember insisting on standing at the door.  I kept the door pried open with my body, while he brought the gifts to us, rather than BrotherHerisme and I going into his room.  The man kept trying to entice us with candy, the promise of gifts.  BrotherHerisme was upset with me as I adamantly refused on behalf of both of us.  When FatherHerisme arrived to the hotel that evening from work and received the gifts we picked up from the man, there was a note attached inviting ParentsHerisme, no children, to dinner with him.

The next day, FatherHerisme insisted on accompanying us to the pool.  We all went down as a family, everyone (except for MotherHerisme who has an allergy to pool chemicals) in swimming suits.  This was highly unusual because FatherHerisme never played with us – ever.  I knew that something was up and somebody was most likely in trouble.  There wasn’t any obvious reason why one of us would be in trouble, but I fervently prayed that it wasn’t me anyway.  FatherHerisme had a terrible temper back in the day.  We all jumped into the pool. BrotherHerisme and I commenced with our usual shenanigans.  FatherHerisme and SisterHerisme started swimming their very grown-upy exercisey coordinated laps (BORing).  At some point FatherHerisme paused his perfect pattern to watch our hooliganisms.  When I came out of the pool, FatherHerisme yelled across the pool, “Jesus Christ! Get over here!”  Well, now I knew.  It was me that was in trouble.

Now was my moment of reckoning for whatever transgression(s) I had committed.  I wasn’t quick enough for FatherHerisme.  He grabbed my towel and yelled, “Get over here!  Move it, young lady!”  My smartass mouth wanted to respond, “but, there’s no running at the pool.”  However, an ancient piece of my self-preservative brain kicked in and I walked as quickly as I could to FatherHerisme.  It’s a catch-22.  I am about to get into big huge trouble,  that in my day usually involved some form of corporal punishment, which begged me to walk very slowly.  On the other hand, if I didn’t move quickly enough to appease FatherHerisme, I would get into big huge trouble, which also, by the tone of his voice, involved corporal punishment.  Dang it, this was big.

When I got close enough to FatherHerisme, he grabbed me with full force, wrapping the towel so tightly around me that I couldn’t move.  As his fingers dug into my arms through the towel and he held me there, his angry voice demanded where my swimsuit had come from.  I told him it was borrowed from a friend.  FatherHerisme gruffly yelled for BrotherandSisterHerisme to get out of the pool, we were going upstairs to our hotel rooms and nobody was allowed to come swimming anymore at this pool.

My borrowed beautiful fancy glorious spectacular one-piece perfectly pink swimsuit was completely see-through when wet.  It was as if I was naked.  A precociously developed 12-year-old naïve girl, often mistaken for a 17/18-year-old due to my developed appearance, had been swimming in a hotel pool with a strange adult man while wearing a tissue thin Caucasian colored bathing costume.  FatherHerisme was enraged with me, with MotherHerisme, with BrotherandSisterHerisme, with the kind family who loaned us the swimsuit.  ENRAGED.  I was heartbroken.  After a 3-month stay at the hotel, we checked out two days later and moved into our unfinished home.  Our family dynamic was that none of us asked any questions of FatherHerisme or MotherHerisme. We were quiet and we obeyed.

A few years later, MotherHerisme revisited the incident when she was cleaning off the bookcases, replacing an oversized book that had been gifted to her by the man from the hotel pool.  She spoke as if I already knew the surrounding circumstances that occurred.  I had no idea until that moment.  The man from the hotel pool had been grooming me, had been wooing ParentsHerisme as his intention was to marry me.  He promised ParentsHerisme that he would send me to the best schools, the best university, all of my wants and needs would be met and more.  He promised ParentsHerisme that even though we would be married immediately, he would wait until I graduated from High School before the marriage was consummated.  He was in love with my beauty and how clever I was.  He wanted to marry me.  Cultural differences, creepo pedophile, you decide.

I can only imagine FatherHerisme’s response in a 5 star hotel dining room with a strict dinner dress code.  The man was immediately removed from the dining room and banned from the hotel.  FatherHerisme made arrangements for us to leave the hotel and move into our unfinished home, no matter what state it was in, as soon as he arrived to work the next morning.  MotherHerisme occasionally still speaks of this incident today, “you know you could have been married and extremely wealthy, but you were only 12 and your dad got very angry.”  Family dynamics *sigh *

Thank the sweet G-ds of every land and universe that this is NOT the experience that either NieceHerisme are having!  I have never punched someone out of anger, but if either of my nieces were subject to this, I would absolutely punch.  Back off, man.  BACK the F OFF.  Let them grow into themselves and peer relationship stabilize before you attempt to knock on their door.  Go ahead and ask their permission to take them out for a tasty cuppa when they are 25 or so.  Eyes up here man, eyes up here.

note:  the kind family who loaned us the swimsuit had no idea about the transparency, as it had not been worn yet by anyone before me.  They disposed of it.

also note:  thank you for reading this to the end